Share
Read more…
0:00/???
When I first met Fred it was 1970 and in fifth grade class.
The school year had already begun
and that day's class had already started.
When Fred walked into class the teacher introduced him
and he took a desk near by mine.
Later I went over and sat down next to him to talk.
We were instant friends and from that day on we sat next to each other.
The first thing I noticed about him was his handwriting.
He was such a good printer
and I always tried to copy his style.
One day we got permission from our Mom's
for me to come over to his house after school.
He had just got the single "I think I love you"
by The Partridge Family.
Later I would talk my Mom into buying me the album
just so I could impress him.
But mostly because we enjoyed the music.
He remained a life long David Cassidy fan.
From that first forty-five
music was a large part of our friendship.
He learned to play guitar and I the drums.
Little did I know that he would turn out to be
the best song writer I've ever known.
For years we played our music.
In this band.
In that band.
Sometimes together.
Sometimes with other people.
At one point we were in a band called The Idols;
a three piece power trio with my brother Dan on bass.
They would share the vocal's with me on back ground.
One night I said to Fred,
"If you're going to be a front man in a rock band
you're going to have to have a cool name."
So we came up with
"Mick" from "Mick Ronson" and "Hendrix" from, who else, "Jimi"
As time went by he would be known as Mick Hoffman.
Keeping the Mick but dropping the Hendrix.
Till this day I think there are still some of our friends
who don't know his real name was Fred.

For the rest of this I will call him by Mick.
It's what I would call him.

Mick, for the last few years of his life, was living in Portland, Maine.
He was the parking attendant for DiMillo's Floating Restaurant.
A job that he enjoyed.
Friends like me could come and visit him there.
And every once in a while even a celebrity or two
would have to go through his gate.
It seemed that almost everyone knew his name.
And he knew theirs too.
Most took time to talk to him.
At Christmas some patron's would give him gift's.

He was from Central N.Y.
His Mother Marie still lives in this area.
He would visit here as often as he could to see her.
This was always good for me because I live nearby
and I always got to see him too.
When he wasn't visiting here
I would drive to see him
four or five times a year; weather permitting.
One April Mick came up to visit for a few day's.
On his last night of visiting
I was suppose to drive over and drop off
a few thing's he had left at my house the previous day.
Only it was starting to snow and
it was beginning to cover the roads.
So I called him at his Mom's
and asked if I could bring it all with me
when I came up to visit him in Maine later that month.
It was really nothing he needed badly.
And nothing important enough to travel in bad weather over.

So that was the last time we spoke on the phone or at all.
Happily, we never ended a conversation without saying a heartfelt
"I love you man!"
If there was one thing I learned even before it was that
Life Is Short.
Little did I know just how short.
You should always let the people you care about know
you care about them.
From time to time just letting them know
they are important and relevant to your life.
Especially when you're away from them for extended periods of time.

His mom needed his help
so he was planning a move back to this area again in the future.
Upon his returning we had made plan's to write and record song's together again.
Possibly recording professionally at a recording studio.
We were both exited at the thought.
We had wanted to work together again for years.
Maybe even, we could do some video work.

Mick was just catching on how to use a computer well
so were were
instant messaging or e-mailing too.
One night he stopped answering my requests to talk
or even email or instant message me back.
I couldn't call him because his phone was busy
and that's how he get's online.
This one time seemed different.
It was now a couple of day's and I couldn't get a hold of him.
It seemed strange but I just figured
he must be really really busy.
I didn't let it rattle me.
It's my birthday now, April 11th, 2003.
He never forgets.
He was always good at that.
I figured he would find time to call me some time that night.
A friend of mine had just bought me dinner at The Ponderosa.
On our way back
we were just going to hang out at my house for a little while
before I drove him back home.
Only before we could get out of the car
my Mom came out to talk to me.
She told me someone very close to me had passed on.
The first thing I said was "Mick?!".
I really didn't expect her to say "yes" but unfortunately she did.

Remember, it was my birthday.

I didn't want to acknowledge it right away that it was true.
It was only after calling his Mom's house
and speaking with his Step-Father
that the reality set in.

For thirty-three years we were always best friends.
I have no reason not to believe that we would always be.
Already most of our lives' we had been best friends.
Through thick and thin.
Friends, girlfriend's and even wife's would come and go
over time but we held on.
I believe it was the music that bonded us the most.
We enjoyed similar tastes.
Let's face it, when it came to his own music
I may have been his biggest fan.
But unfortunately on that day in April, 2003,
as the song goes,
that day was
"The day the music died" for me.

I'm not religious by any stretch of the imagination,
but even as type this,
I looked over my shoulder
to see if he was in the room with me.
Funny thing is
I don't know if I want him to be.
I don't know how I would react.

I still stay in touch with his Mom.
Though not nearly enough.
I feel guilty about that a lot.
I let things, like this website,
keep me from driving over to see her.
I know how much his leaving us all
has hurt his family the most.
I lost my best friend.
They lost all of him;
a son,
a brother,
an uncle, a nephew, a cousin.
I lost thirty-three years.
They lost forty-three.

In my humble opinion
he was a gifted artist.
A much underrated guitarist.
An amazing songwriter.
He had an incredible knowledge of music.
You could ask him about a band.
He could tell you what songs were,
what order they appear on the albums,
what year the album came out,
the musicians,
and who wrote and sang the songs.
even the cover art.
Rarely could you stump him.
Not just music.
He was that way with comics,
magazines, stamps,
and so many more.
Most impressive of all
he could tell you their value.
He was a collector.
He loved to buy and sell things.
Ebay was opening up a whole new world to him.
Literally.

He was finally ready to move on and start a new.
Things were looking up.
You could just hear it in his voice
and see it in his eyes.

To Fred,
a.k.a.,
Mick,
You were the Best Friend anyone could ever want.
Your music will live on in the people you have touched.
Rest in Peace My Brother.
Your Best Friend,
Joad 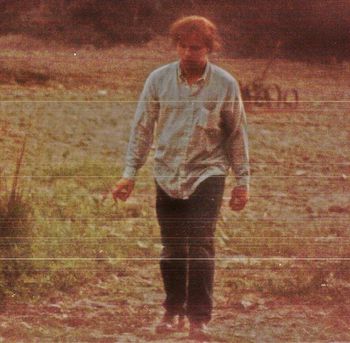 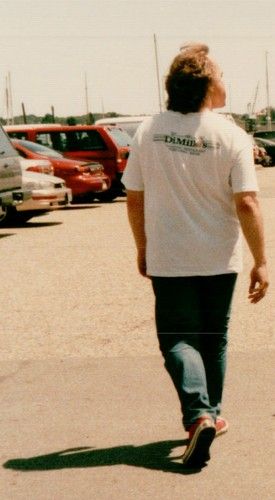 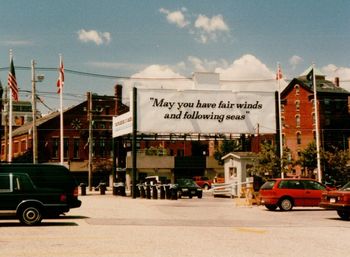 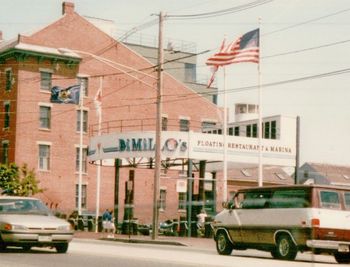 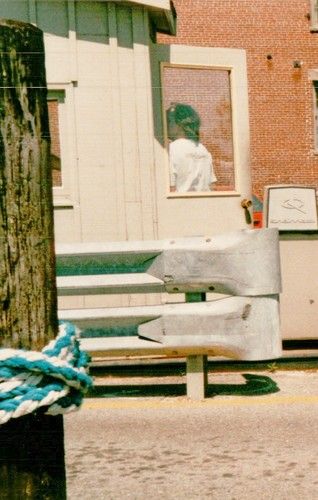 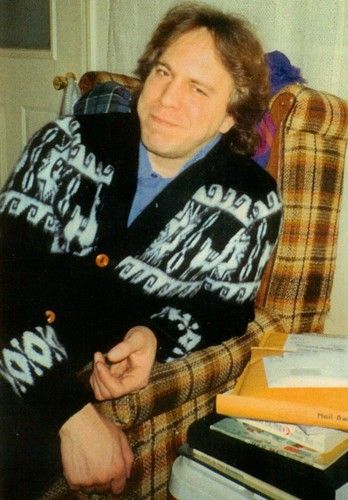 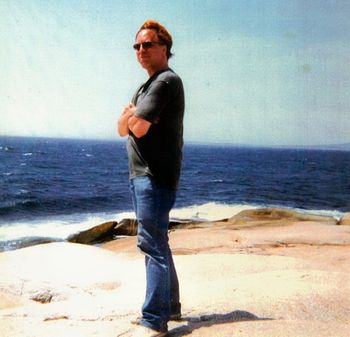 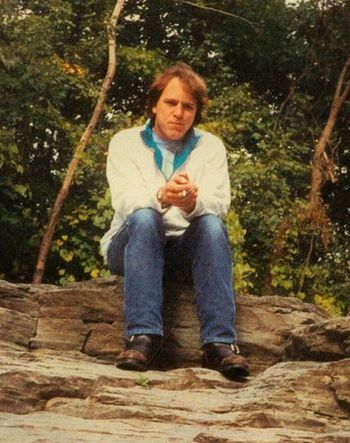 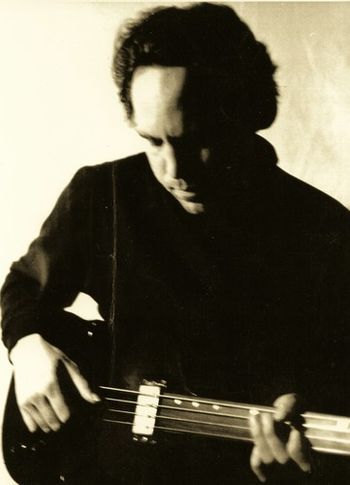 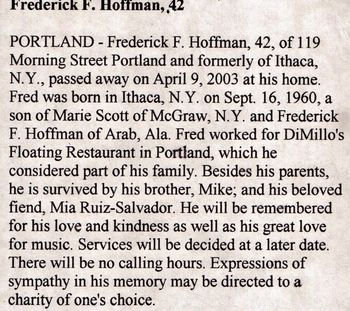 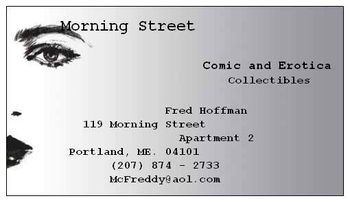 "BACK TO THE ARTIST'S"